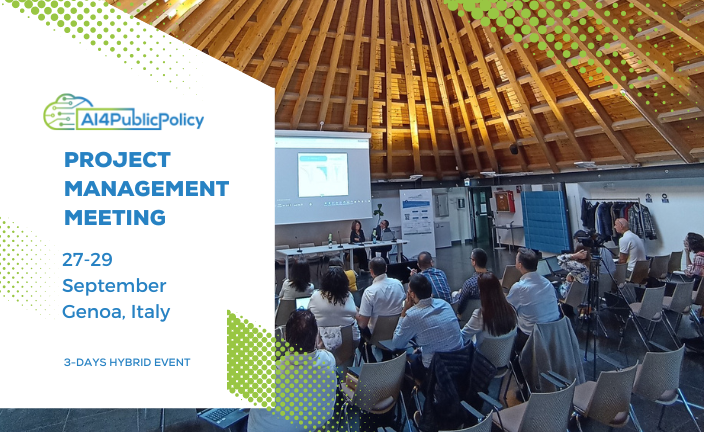 The AI4PublicPolicy Consortium held a plenary project management meeting in Genoa, Italy, to work closely on the overal strategy of the project and finetune its next setps. The event, took place in 3 consecutive days, from 27 to 29 of September 2022, while both physical and online participationos were opted by partners. Partners from GFT team and Genoa’s Municipality department synergised to organise the event, in which WP and Tasks Leaders, along with all the invovled partners, discussed the overall efforts carried out and jointly outlined what resources and actions are necessary for the the future.

The agenda of the first day focused on the VPME’s projected functionalities, for its first half. Partners exchanged ideas and aligned their workplans around what the AI4PublicPolicy will deliver to its users and how its interface should be structued. During the second half of the first day, the agenda comprised of small hands-on sessions where pilot teams got to know more on AI4PublicPolicy platform guided by technical partners!

On the second day of the project management meeting, the agenda was initially dedicated to the main conclusions of the hands-on sessions about the platform’s feel and usage in order to address pilot teams’ comments and ideas shared with technical parnters. Then, a deepper discussion was made, whose main topic dwelved around how pilot sites and can exchnage policies and best pratcises that will stem from AI4PublicPolicy platform utlisation in their specific cases. The second day concluded with two tailored sessions: on the one hand, pilot partners and relevant tasks leaders planned the modalities of the second co-creation workshops phase as well as data management ethics, sustainability of the platform and fruitful citizens’ engagement; on the other hand, technical partners organised a project workshop to harmonise platform’s set-up progress and the preparation of corresponding deliverables.

The third day was dedicated to an outreach activity. That is, the project held a dissemination activity in the form of webinar whose goal was twofold. The webinar aimed to engage with Genoa’s local authories representatives and showcase what benefits the project’s VPME can bring to their services. In addition the webinar enabled pilot partners to exchange knowledge with the local stakeholders, thus getting valuable external feedback for their pilot and set a commonground for future collaboarations.